On this day 17 years ago, Princess Diana died in a car accident in Paris.

We were both in high school at the time and hearing the news is still as clear as day in our heads.

Here we are 17 years on walking the streets of Paris oblivious to the significance of today until we came across “The Flame of Liberty”, which is located just above the tunnel where the accident happened. 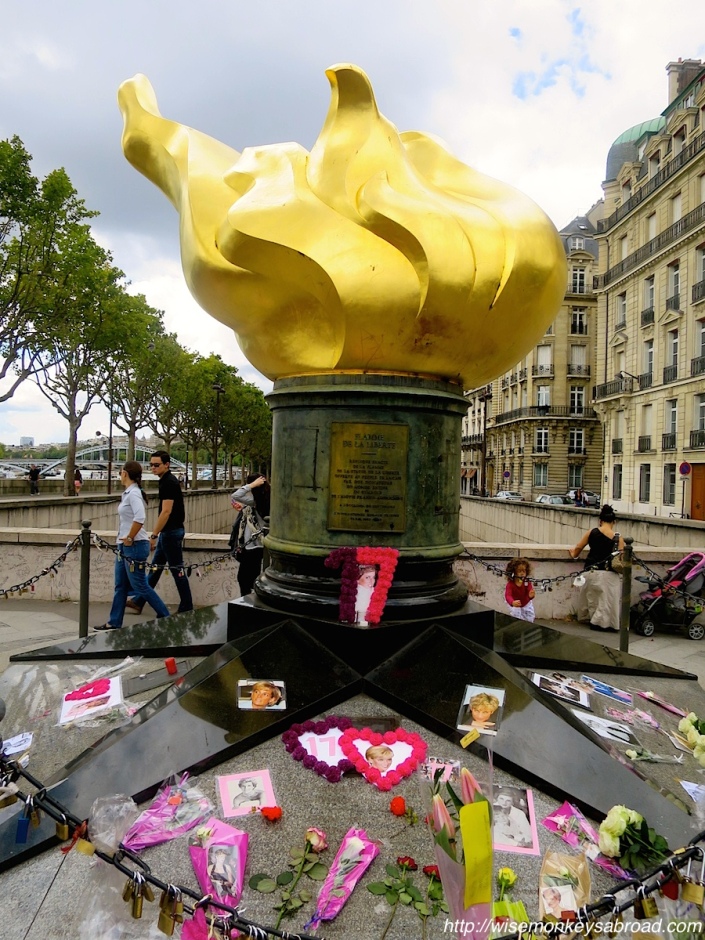 The Flame of Liberty is a full-sized replica of the one held by the Statue of Liberty in New York City. And is now an unofficial memorial for Princess Diana.

In memory of Princess Diana

I will never forget turning on the TV only to find out that terrible news. I wonder what she would have been doing now if she was still alive. Probably still doing good things for others.

Yes, some news just stays ingrained! It is always interesting to think of ‘what ifs’ but we will just never know!

Thanks for sharing, I want to check out this monument next time I’m in Paris.

Hi Lyn, We were glad we came across it! Thanks for stopping by.

It was one of those events that you remember where you were when you found out. I was in Italy on summer holiday and we saw a newspaper headline and thought that we had translated incorrectly.

Thanks for sharing where you were when you found out! There are a few events in our lifetime where the moment we find out just sticks.

Thanks for this guys. I’m British and it was an awful time. I remember coming down the stairs and watching it on the news and thinking it was some sort of joke. I was awfully upset. When I think about it, it still makes me cry a little…..!

Yes, it didn’t seem real for us either when we heard about it. Thanks for sharing your memory of it!

Where were you when ….. ? It just happens that we heard when we came down to breakfast at the start of an Italian tour. Later, we watched some of the funeral on TV in a shop window near the Duomo in Milano. One of those ‘landmarks in our lives’ unforgettable! Gosh 17 years. Go safely, Le & David.

Hi Ken, Thanks for sharing where you were! It is crazy how vivid these type of “landmark” memories are. We would also like to say a HUGE and sincere thank you for supporting us on our walk. Three days to go… 🙂

I’m only 4 years old when Princess Diana died. As a little girl I believed that fairytales and princesses are true. As year passed by, I heard the news about Princess Diana, It was Heartbreaking. I searched the internet about her life, what happened or is there any false/hidden issue about the cause of the incident.

I don’t really know what happened but from the her beautiful works she has done. I know she will be love and remembered by the people.

Thanks for sharing your thoughts! Here legacy will live on and her passing was a tragedy as is anyone whose life is lost too soon.

That day really sticks in my mind too, can’t believe it was 17 years ago. Didn’t know about the Flame of Liberty, one to seek out on any future Paris trips.

We too didn’t low about the Flame but happened to “stumble” across it when we were making our way to the Seine River. Time simply flies, doesn’t it?

I think so many people have that memory and they just know exactly what they were doing when they heard. I was also in high school and my dad told me at breakfast. The first thing I said was ‘oh my god who killed her?’ – he said my sister had said the exact same thing….

David’s dad was the person who told him and Le was on the phone to a friend who told her. It’s amazing how certain events remain so clear in our heads, huh? News like this always sends ripples and shock waves! It was quite surreal standing where it happened and seeing the flowers and notes.

Yeah, I think it was the only think we all spoke about for the rest of the day. I went out with friends and we all wandered round feeling melancholy – it’s also so strange that everyone felt such a connection with a stranger. Not many could even say they were a fan of the royal family particularly but everyone just felt so strongly about her I guess. Ive been to Paris twice but for some reason never seen the torch, I’ll have to make an effort when I go again.

It certainly is bizarre that people feel that connection to “famous” people. Possibly because their lives are an open book and so we feel like we “know” them?! And when real life events happens it shows that they are only human like us too – sometimes the media treats them otherwise (as if they are invincible, have no feelings, deserve to be mistreated or criticised).
Thanks for sharing your thoughts!