finisterre: the end of the earth

Once believed to be the furthest point west on the Iberian coast, Finisterre was aptly named “the end of the Earth”.

Finisterre is also the place that marks an end for some pilgrims of the Camino de Santiago (or Way of St James) who can walk on for another couple hundred kilometres after arriving in Santiago de Compostela. 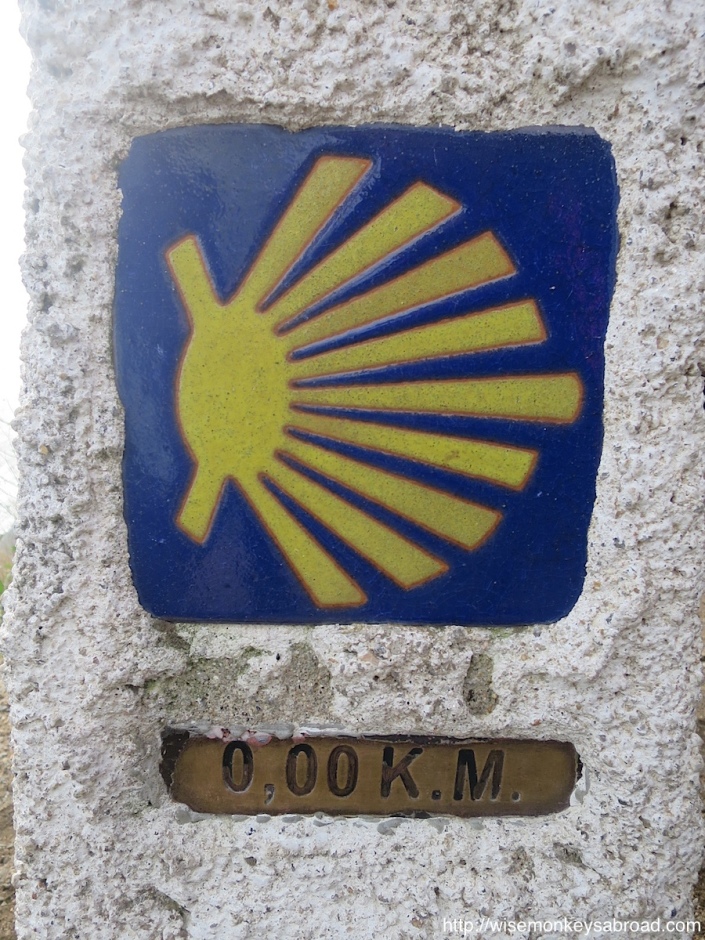 We actually had no desire to go to Finisterre when we initially embarked on the walk. But once we started walking, we felt like it was somewhere we had to visit. And then it didn’t seem so straight forward on how we would get there.

The options for us were:

(1) to walk it: unfortunately (or fortunately) we didn’t have the time for that.

(2) to catch the local bus: this was our plan A until we met a fellow pilgrim (about 3 days from finishing) who warned us that he did that the previous year, and it was almost 3 hours on the local bus and then an additional several kilometres of walking. And this was just to get there. So add the same amount of time to come back.

(3) to hire a car and drive there ourselves: there were too many logistical things about this one, so we benched this as a possibility.

(4) to book a day trip tour on a bus or minivan in Santiago de Compostela: this was the most enticing option. And the one we settled for when it came down to decide.

The day we went to Finisterre, the sun was shining brightly and the skies were blue. Upon arriving, often as with popular tourist spots, there is an array of visitors. Yet Finisterre had a different feel to it – it was peaceful somehow. It was calm and it actually felt like we had read the last page of an incredible book. It was closure for us, standing at the end of the Earth and looking out to the horizon.

As we stare out, we can see why during the Roman time, it was thought this was the end of the known world, standing right there… the Earth looks flat and we see nothing beyond.. it’s just water as far as the eye can see. 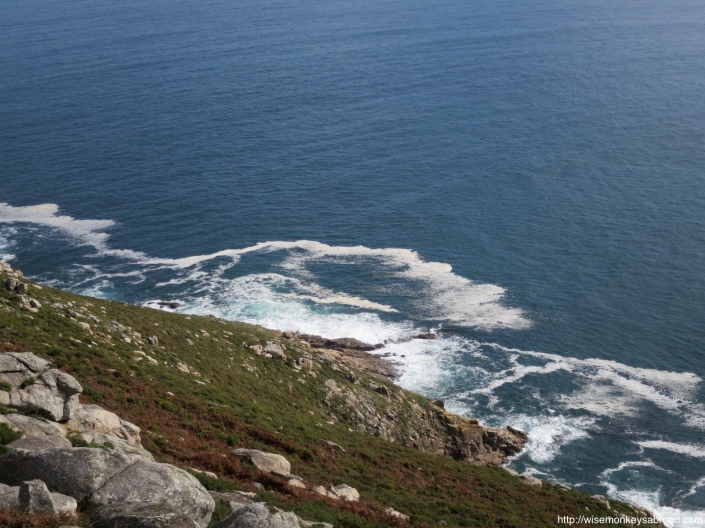 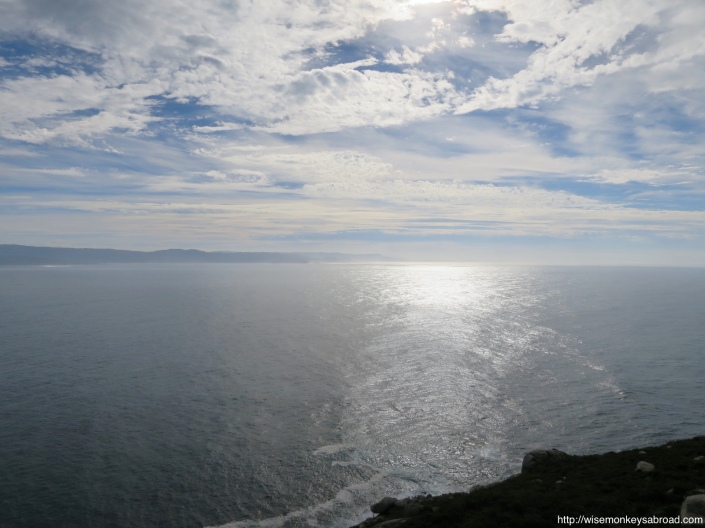 Muxia is also another place that pilgrims can walk onwards to from Santiago if they choose. Here stands a church, Virxe Da Barca Sanctuary, which on December 25, 2013 was destroyed by fire after being struck by lightning. We were told that on the Orthodox Christmas (January 7, 2014), huge, powerful waves swept through and knocked over the church. Suspicious or freakish, either way, it was unlucky for this building built right on the edge of the surf. Since then, restoration has been underway and we were able to see the outside of what once was. 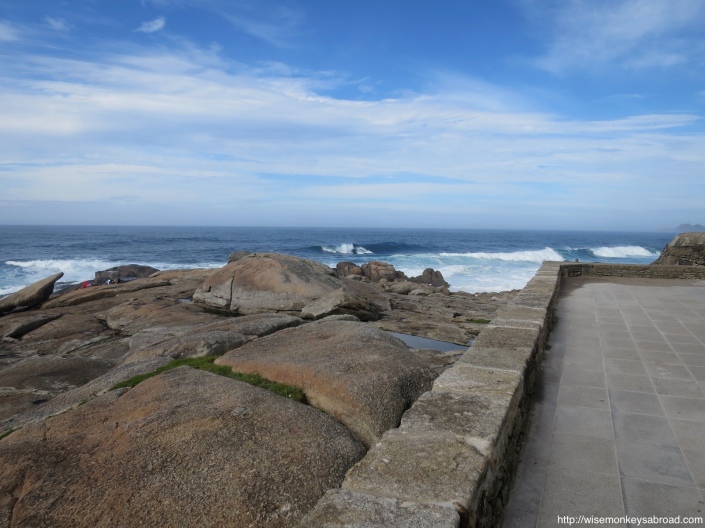 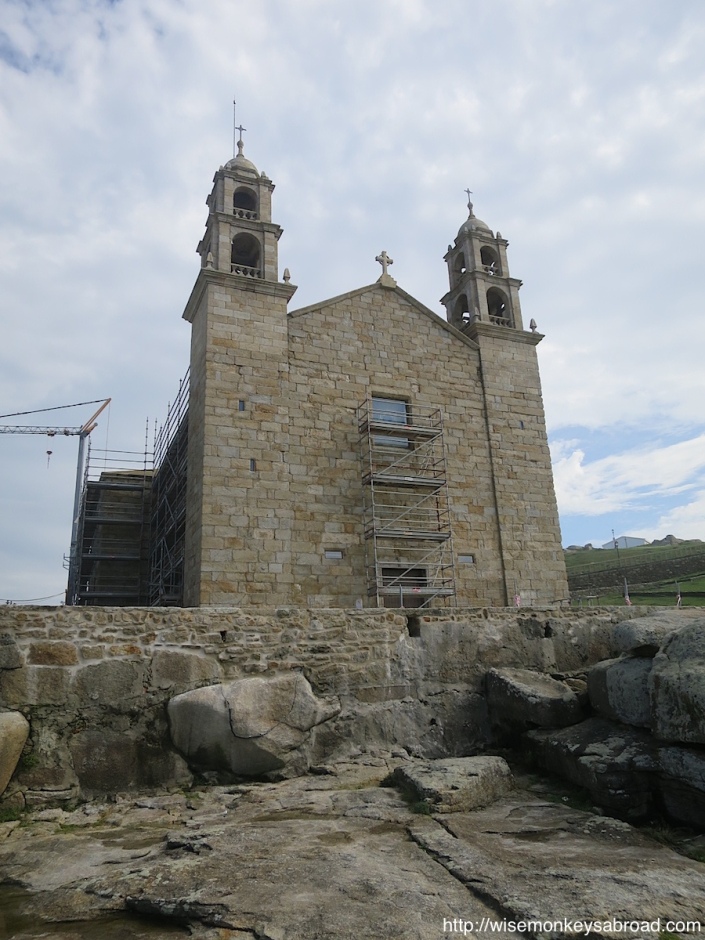 One of the highlights of this part is the healing rock. It is said to have healing powers. Crawl through the hole nine times and it is said to heal a sore back. Lucky we weren’t there for any curing. So why were we even there? 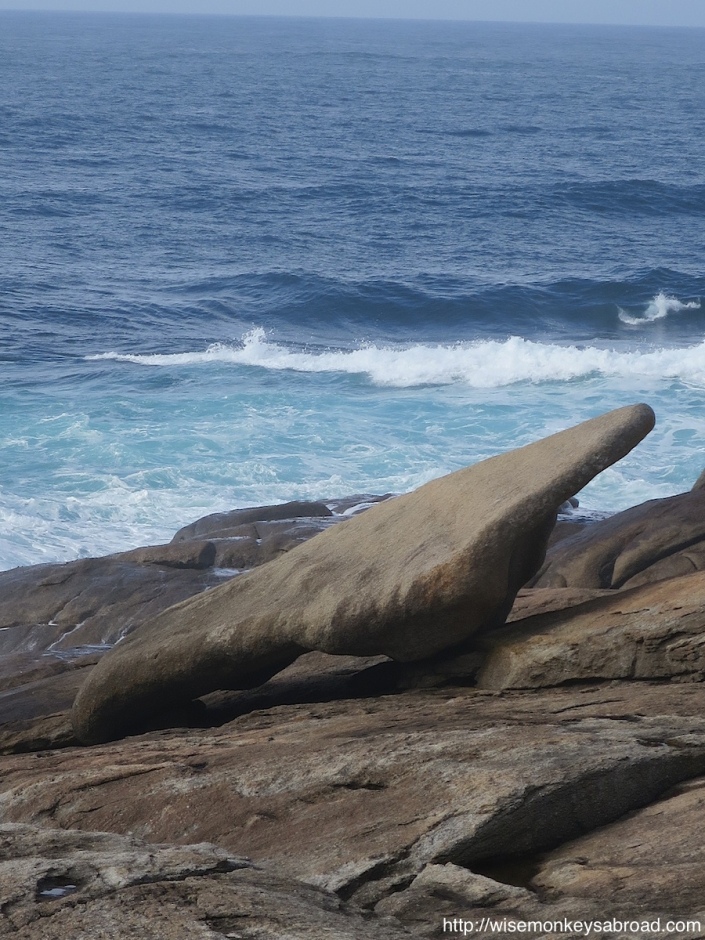 There really is no better way to end an epic journey, other than to visit the end of the Earth.

Please feel free to leave us any comments.

23 thoughts on “finisterre: the end of the earth”

Thanks for sharing your thoughts on the Camino. My sister Eileen, her friend Ola and I met you at the Hotel Akerreta in early September 2014, just a few days into our Camino. Like you, we finished our pilgrimmage, spent a couple of days in Santiago and took a local tour to Finnestere and Muxia. Buen camino, wherever you may go!

Wow!!! What a spin out that you remember us from 4 years ago! Please do get in touch on wisemonkeysabroad@gmail.com so we can share some memories!

Is it the end of the Earth, or its beginning? 0.00Km to me looks like the beginning 😉

The 0.00km is relevant only for pilgrims where the countdown starts elsewhere… i.e. for us it was 790 km 😉

But that’s a good point… what came first the chicken or the egg?? We like the way you think!

HHHMMMmmm… crawling through that hole in the rock 9 times would be more likely to GIVE me a back problem!! But if that’s what it takes to make the End of the Earth memorable, then so be it!

LOL – totally agree with you! We didn’t try because we too thought crawling through it that many times would bring on the back pain 🙂 Or would make your knees hurt and therefore forget about the back pain 😉

Sometimes it’s just easiest to do on a day trip and let someone else do the driving! It was worth the effort to go this interesting place.

We totally agree… sit back and enjoy the trip is so much easier! Have a great weekend ahead! Up to much?

We’re celebrating Australia Day on Monday with a family and friends barbecue and trivia night. With lamb on the menu of course! Enjoy your long weekend.

There’s gotta be lamb on Australia Day, right?? Hope you enjoy the long weekend too. When it ends, David is back at work… so here’s to our last hurrah for the holidays!

Me too! Have to pay for the next holiday.

That’s the way we look at it too 🙂

I can see where it would make a fitting end. –Curt

Thanks Curt, it was definitely a good way for the experience to end!

The thing about the destroyed chruch is really creepy. However there on the coats they do have some crazy big waves sometimes so it should be more of a surprise that it didn’t happen earlier…but on that date 😮

Yes!! We thought it was a little creepy and sinister…. but maybe we are just superstitious. Our guide said those to superstitious is a sign from someone saying that the building is just too close to the sea 😉
That is probably a pretty reasonable sign!

Good to see ‘the walk’ post again 🙂 Did you see the movie ‘the way”?

Yes, we have seen ‘The Way’ but only after we got back and we have to admit, we were not impressed with the portrayal. But that’s for a different discussion 😉

You are the experts, so you would be knowing better 🙂 So is there any better movie on Camino?

No, we haven’t actually seen any other Camino movies!

Alright 🙂 I’ll update you if I find any

It does seem like quite a poetic way to end your walking journey!

“poetic way to end…” Mani – that is beautifully said! Thank you! And it was poetic 🙂

Road tripping today to Canberra for the day! We always love a good road trip, it’s a great chance for us to admire our Aussie scenery & see how much has changed during our rather tumultuous summer. After the bushfires and then heavy rainfall (although not enough to break the drought), there are sections that have turned green while others sections still very dry. It was sad to see a few roadkill wombats along the way as well as the burnt trees. No matter how you look though, Australia, we still love you!
After the first week back at work, we are convinced we’d rather laze on a #beach 🏖
Australia has so many scenic spots #nofilterneeded ...................................... 📸: Phillip Island, #Australia
And just like that we are coming home. The original plan wasn’t even to fly - we were meant to be road tripping but due to the raging bushfires on the East Coast it was too unpredictable so we had to rejig & shorten our South Coast road trip to a smaller trip away. Although, we were happy to see lovely weather awaiting us as we flew in, we would’ve preferred to see some rain.
We’ve been off work now for 4 weeks, still a couple more weeks off before work starts! You could say, “Life’s a Beach” 😁 📷 : Brighton Bathing Boxes
We hope that however you spend your end of the year, you are safe and/or surrounded by your loved ones. Because there are many people and communities in Australia at the moment who are fighting fires or impacted by the fires. Here’s to hoping that the New Year and 2020 brings with it rain, hope and regrowth to our beautiful nation! We wish you all an uplifting and promising year ahead filled with love, happiness and vitality! We’d like to take a moment to: * Reflect on how we treat one another, the other inhabitants of this Earth and Earth itself moving forward. * Remind ourselves that we should be respectful, selfless, kind and caring all-year long and not just on special occasions. * Consider that not everyone is as fortunate as us. * Spread love, cheer and positivity. * Spend our energy on what is good and be grateful but be inspired to see how we can make things better. Happy New Year! Here’s to more travels if that’s your thing 😉