inside the world famous hermitage

To see every piece of artwork in the Hermitage in one visit is impossible. Apparently to look at every piece (of the 3 million collection) for 30 seconds each, would take up to 9 years. We did not have that much time on this trip!

Russian Empress Catherine the Great founded the Hermitage in 1764 when she purchased masterpieces from Western Europe. The museum has 4 of its 6 buildings open to the public; Winter Palace, Small Hermitage, Old Hermitage and New Hermitage.

As we walk through the rooms and hallways, the opulent lifestyles of the Russian past smacks us in the face! But in saying that, the lavish and exquisite interior of the museum is the perfect home for the masterpieces. 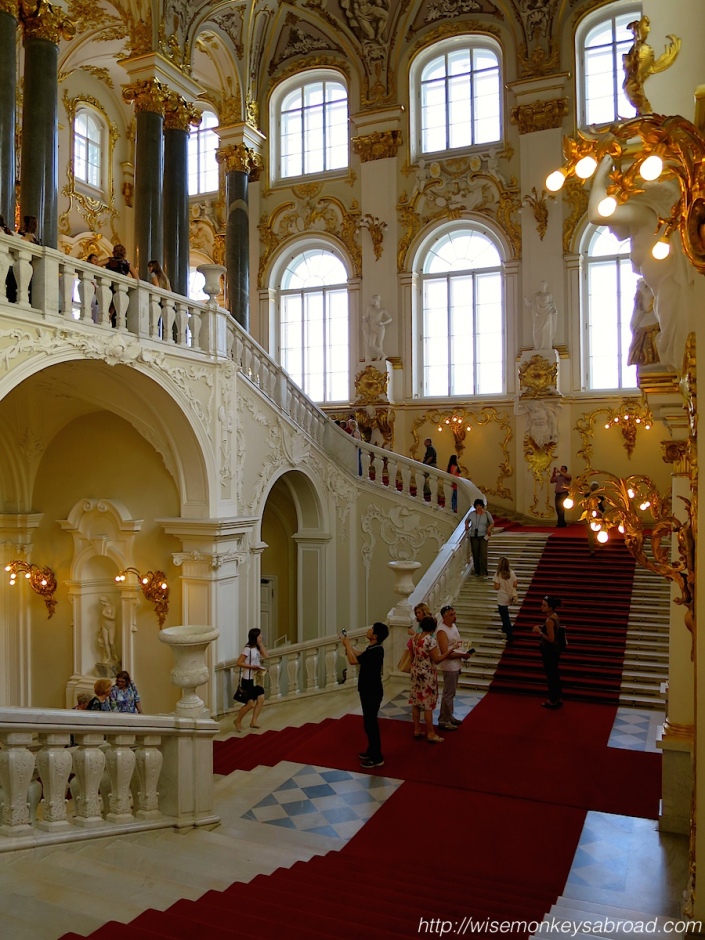 Considering that we would not be able to see every single piece in our one visit, there are a few must-sees in the collection. And the beauty of what we saw is simply worth sharing. The first several are masterpieces of Da Vinci, Raphael, Michelangelo, Rembrandt and Van Gogh. 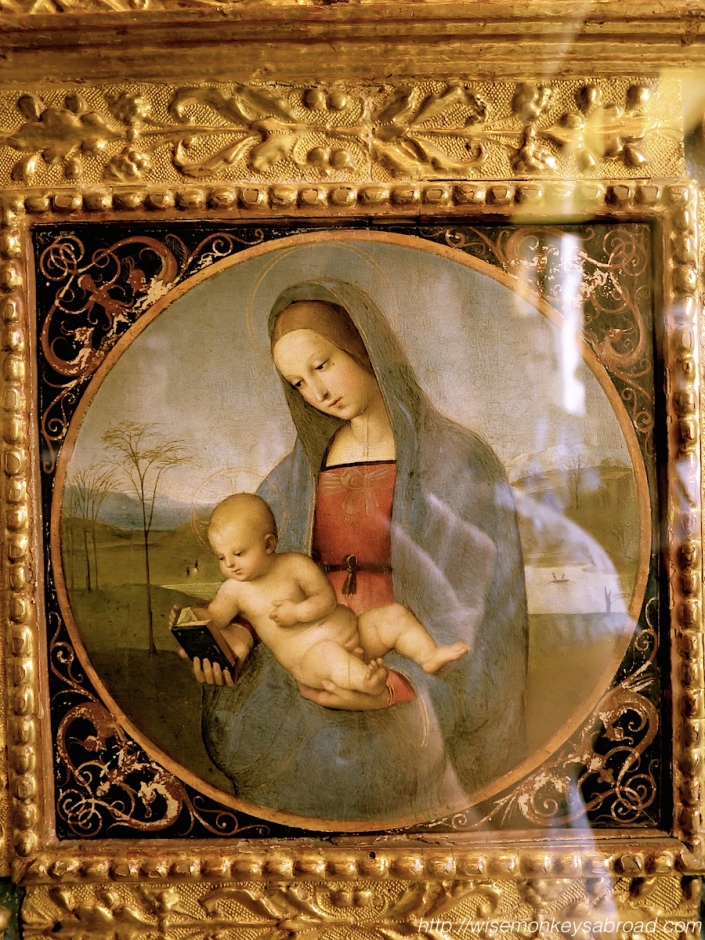 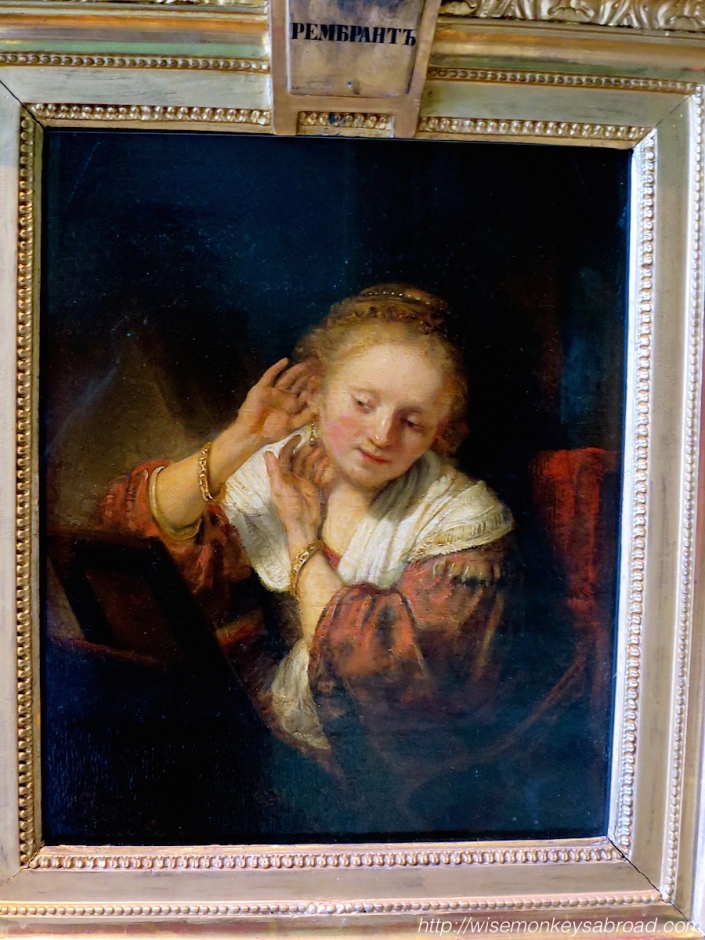 Hermitage is closed on Mondays. It also can get very busy and we heard pickpockets use the opportunity to pounce so be sure to keep an eye closely on handbags and wallets. Also remember, backpacks are not allowed in the museum.

For photos of our trip to Russia, see our Facebook page.

Have you visited the Hermitage? What did you think?

Okay – I’m just going to come right out and say it. I did not like MONA, so bite me! I imagine that there are many people out there who would be mortified by me saying this. In fact, MONA came very highly recommended by most people when they found out we were visiting Hobart, so I might be upsetting some by writing this.

MONA stands for Museum of Old and New Art. To be honest, I didn’t see any old art, or maybe I just chose to whizz through the entire place because I felt a little overwhelmed by it all. It appeared to be new art which my mind is simply not geared to understand or appreciate. I had no idea what to expect before visiting and let’s just say, I left still not knowing what to feel. Should I feel like I have no culture because I just don’t get it?! Or do I just wish I was born several eras earlier?

I won’t deny that some of the exhibits were intriguing and others quite unusual, but in a good way. I would have to say my favourite was the taxidermy piece of art. The intricate level of suspending every little dragonfly, fly and bee simply amazed me!

There was one particular section where the exhibits were dark and macabre. There were joints and brains floating in a giant head, there was a maze room that was dark and unsettling and when you followed it around, you got to a tiny room with a mirror at the top, there was a large theatre room with a giant screen displaying lines and lines and lines of numbers with screeching loud static noise. I couldn’t spend too much time there, it was beginning to make me feel claustrophobic. Come to think of it, it would be a perfect set for a horror/thriller movie: sound & lighting sorted!

But the piece that stirred up the most conversation was what we termed the “Poo Machine” which is part of the “Evolving Exhibition”. It is exactly that… it’s a machine built to resemble our digestive system. Built with glass cavities and enzymes included all to mimic the cycle of eating and then defecating. It is fed routinely through the day at one opening (i.e. the mouth) and by 2 pm each day, excrement would be voided at the other end. Let’s just say, the room smells awful!

So I can’t complain that the experience wasn’t memorable. I just won’t be raving onwards to everybody else I meet who is visiting Tasmania. Sometimes I wish people wouldn’t talk things up so much so that it sets an expectation.

Anyway, in all fairness, I didn’t use the cool iPod touch guide device thingy that they give you to explain the artwork. I may just have appreciated the art more if I had taken the time to learn about them.

I understand MONA brings in a lot of tourism to Tasmania. So that’s fantastic for them! At least now, I can say that I have been. There is no rule that says I have to like every place in the world I visit.

MONA is located about 15 minute drive outside of Hobart City Centre. There is parking available however limited, so get there early. Actually get there early regardless because when those ferry loads of people arrive, it gets pretty crowded! Adult admissions are $20 and children under 18 are free.