a glimpse inside peter and paul cathedral

Everywhere we visited in St Petersburg, there were a lot of people sightseeing, doing what we were doing. Peter and Paul Cathedral was no different. In comparison to some of the other European churches we visited, the cathedral was probably on the smaller side so the crowd here might’ve seemed disproportionally large. 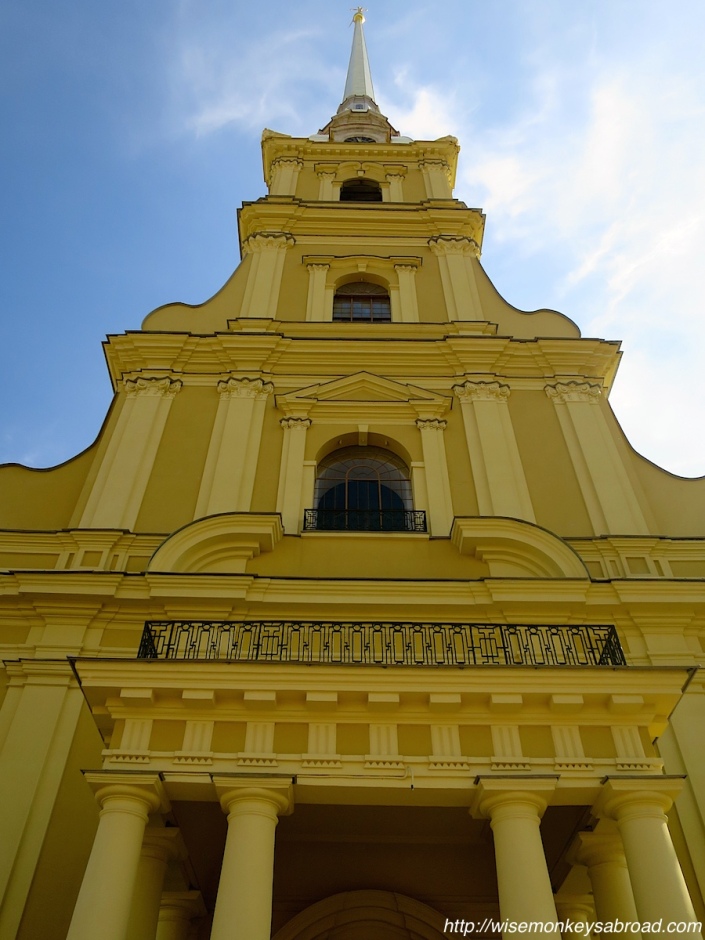 The draw card might be because the cathedral holds the remains of many of Russia’s Emperors and Empresses, including Tsar Nicholas II and his family. The last Tsar along with his family, were famously executed in the dead of the night. Though rumours say that two of the children were never found (the more famous being the Princess Anastasia), our Russian tour guide said that those stories are merely a “fairytale” made up by the rest of the Western world to make the history more exciting.

Anyway, as with other Russian buildings (such as the Hermitage and Catherine Palace) built during this era, the interiors are opulent and ornate.

And here, we shall stop writing and let you take a glimpse inside the cathedral for yourself.

Hope you enjoy our photo essay.

Please feel free to leave us any comments. 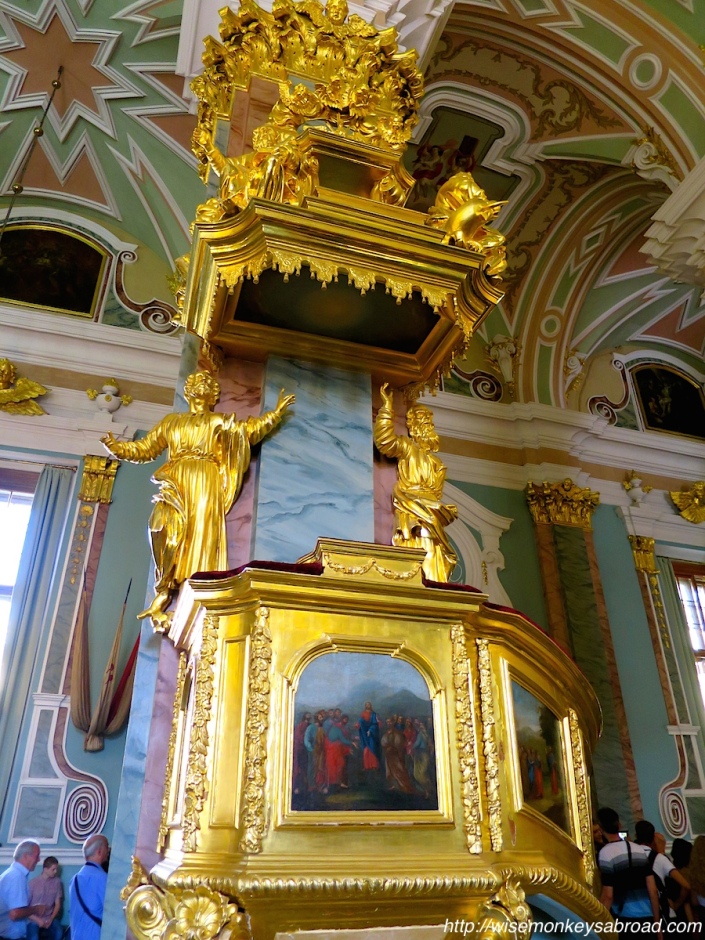 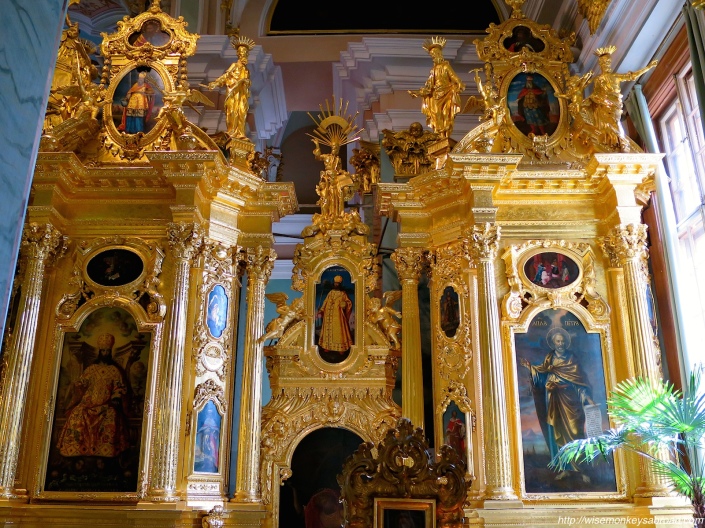 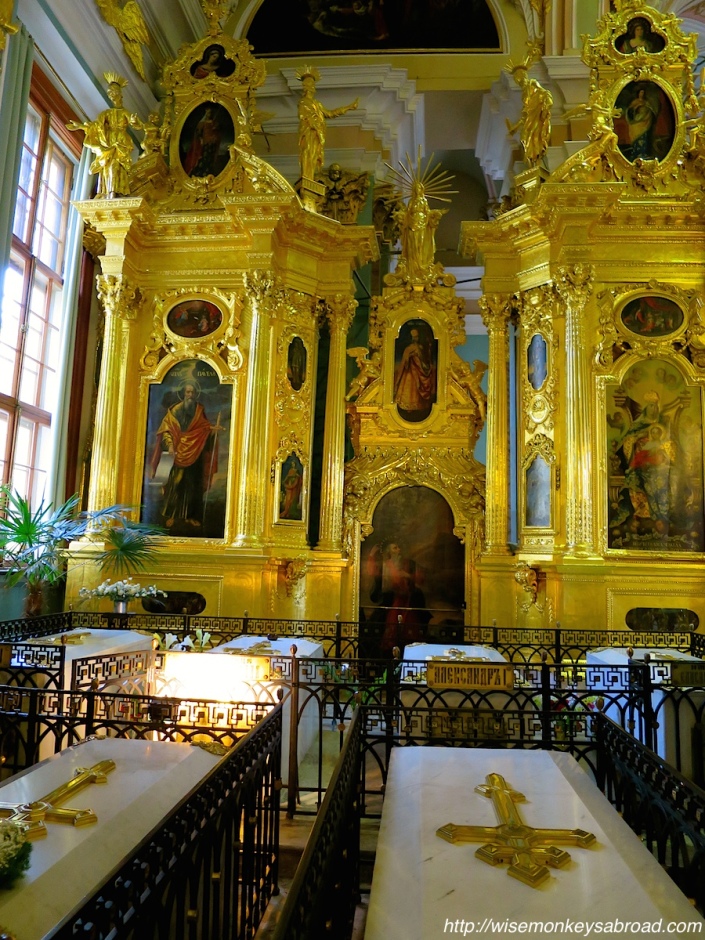 50 thoughts on “a glimpse inside peter and paul cathedral”

Beautiful pictures ! – hope to see this when I go next year

Fingers crossed that you do get to visit – it is an extraordinary place. Thanks for your lovely comment!

It really is almost fairy-tale like some of the decor of these buildings; so extravagant and ornate with beautiful colours.
Hope you have a lovely weekend, Yvette 🙂

OMG I would never guess from the outside how amazing this church is from the inside, I am shocked! ❤ Beautiful!!

Isn’t it so deceptive?? We were the same and then the minute we entered, we were straining out necks in every direction to not miss a thing 🙂

hahahaha I can imagine!! I would like to go there again and pay more attention to the details 😀

minus the “again” hahaha I have never been there.

Allane, you are soooo funny! You make us laugh with your comments 😉

What a stunning cathedral

It was very surreal walking through it. Couldn’t believe how lavish it was! Thanks for your comment.

Would love to go to Russia someday. Their old buildings are so magnificent, Thanks for the beautiful pictures.

Pleased to be able to share! It was a real treat visiting this Cathedral and Russia in face because Russia is in a league of its own.

What canera are you using? Your colours are so bright and liminescent! Or it could be all the gold. 😜

Hey there – we use a compact camera (Canon Powershot S120). It’s an absolutely brilliant little camera and one of the best ones we have had for a reasonable price. But in this instance, the bright colours are thanks to all the gold 😉

It was very extravagant and definitely overwhelming. You just don’t know where to look when you are in there 🙂 Hope you have a lovely weekend ahead.

I can imagine being overwhelmed, must have been mind-blowing 🙂 you have a good weekend too!

Amazing photos! I have never been but it looks beautiful. 🙂

Thank you. So many of these places were jaw-droppingly extravagant. Have a wonderful weekend ahead.

sometimes i forget how much I love this city. Then I remember….

The colours and intricacies are incredible! Nothing like this in the Aussie Outback!!

Definitely nothing like that in the Aussie Outback that’s for sure 😉 Actually maybe nothing in Australia quite like that!

It was quite a sight 🙂

My goodness. How extraordinarily beautiful. Thanks so much for the glimpse into this fascinating period of history. The wealth, power and mystery of the tsars is amazing.

Yes – we are sooo intrigued by this period in history for Russia. Actually all history fascinates us, and travelling really gives a great taste of it when we see things for our own eyes – then we come home and want to read even more about it. Very glad to hear you enjoyed a sneak peek inside 🙂

I always enjoy your posts, Monkeys!

Awwww… so pleased to hear that 🙂 Your words have kicked off our weekend to a good start!

What a stunning cathedral! And of course wonderfully taken photos. Definitely on my bucket list.

Beautiful, L&D. Thank yo for sharing. We didn’t make it there – nearest we got was the view from the Neva. Next time, maybe😉

Next time is always such a good reason to keep travelling 😉 Thanks for stopping on by and hope you have a fabulous Friday!

Thanks Vlad – glad you enjoyed the pictures 🙂 Enjoy your weekend!

Aren’t the ceilings amazing. I love the colours.

Yeh, the ceilings were something in themselves. We always get sore necks when going through these old buildings.

Looks beautiful and immaculate. I will keep in mind to see this when we go there! 🙂

Yes, definitely worth a visit albeit very very crowded. There are plenty of extravagance to see when you are in imperial buildings in Russia 🙂

I have been there a couple of times and it was also very interesting. The thing which stuck the most with me was the difference between all those grand buildings from old times and then basically the poor areas all around the city where you feel like entering a goal different city or world

It’s so beautiful, inside and out. I liked the little angel with the ladder. (Isn’t it astounding how much money has gone into religious edifices, the world over.)

Oh, isn’t it just a wonder about the expenses?! Different times and different priorities – somethings we can never quite understand. But in saying that, we visit places like this and are simply in awe at the sheer brilliance and detail of the work.

Wow.. such amazing pictures. European Churches have been on my bucket list for long time now! Hopefully very soon 🙂

One can easily “overdose” on too many European Churches because there are SOOOO many. But we love visiting them – because we never know what the inside will look like 🙂 Hope you do get to tick some European churches off your bucket list.