the long road to brazil

Famous last words definitely not uttered by us! Especially not after the journey it took for us to get to Brazil.

We left Sydney Airport on Wednesday night, June 11 and didn’t arrive to Cuiaba (the first city that the Socceroos play in) until 11pm Cuiaba time (about 1 pm Sydney time June 13). Two days lost in transit.

And to be fair, all the flights were relatively comfortable and food onboard was actually palatable. But it was the sleeping upright and the lack of a shower that really made us feel seedy!

But all that aside because when we witnessed the LOVE this country has for football we knew we made the right decision to come here for the World Cup.  While we waited at Rio De Janeiro airport for our flight to Cuiaba, the opening World Cup match was on: Brazil VS Croatia.

As we walked around the food court in the search for our dinner, everyone’s eyes were fixed on the little TV screens scattered around. There were hundreds of people all facing the same direction. It was deadly quiet as the spectators anticipate Brazil’s recovery from their own goal scored earlier. But when Brazil were able to equalise and then lead the game  – to watch the crowd erupt in celebration was enough for us to forget the flight! It reminded us why we were really here. We could just feel the passion in the air and the buzz of relief when Brazil won that game.

What an opening game to witness amongst the locals! 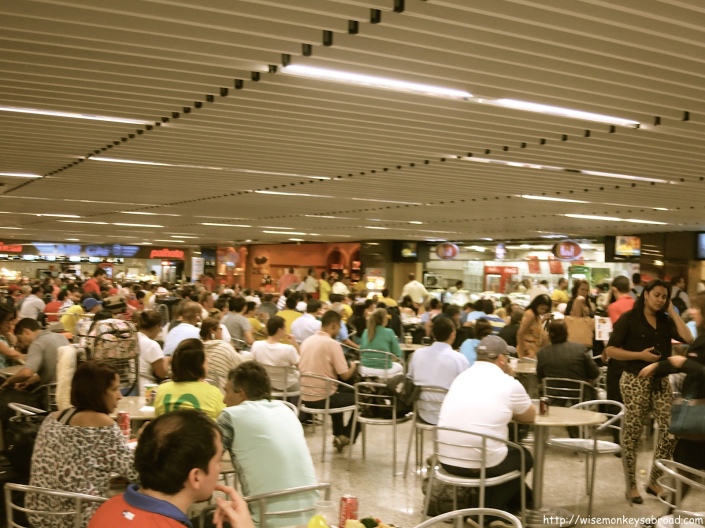 And today is GAME DAY for us – Australia play Chile in their first round match and we have just been handed our Category A tickets complete with access to the VIP tent before and after the game! HOORAY!!

Now, its only 7 hours from kick-off, we cannot wait for the atmosphere and experience.

Gosh, so it took this trip to Brazil to make us realise the ONE thing we really don’t like about travelling… the transit itself which is long forgotten anyway because as soon as we reach our destination, we embrace what lies ahead!!

36 thoughts on “the long road to brazil”

Wow…what a long journey!!! But I’m sure you will have a great experience in Brazil!!! Unfortunately the socceroos disn’t win the first game but they were brave!!! You’re in a difficult group! Today I’m gonna watch ChilexSpain at Maracanã and we’re gonna support Chile. Let’see how this group is going to come out. : )

Chile WON!! Woohoo!! Sadly for Australia it is all over. But we are so proud of them! They played amazingly 🙂 We love Brazil and you are right – the great experience has made that long plane journey a distant memory!!!

Two thoughts – firstly, that you are still able to write coherently after that journey is awesome and secondly, that you appear to be doing the football in style, whatever other economies you have endured to get there. Good that the socceroos were not disgraced too.

Thanks Ken. We were probably back on Aussie “waking” hours time at that point so were functioning less like zombies 😉
When we fell asleep – we didn’t move one bit!
Think we have adjusted to normal now….
PS – Yes, we thought Socceroos played really well considering who they were up against. Hope we can keep it up!

I saw parts of yesterday’s game and I was thinking of you. Glad you enjoyed it after that marathon journey. Have fun.

Thank you!! It has been amazing 🙂 We know soccer/football is not your sport of choice so glad you did see parts of it yesterday 😉

I only watch when Australia is playing. They did well.

Yes considering the flack they cop from everyone everywhere… we think the Socceroos did really well to score against Chile and to keep them “at bay” for as long as they did between their 2nd and 3rd goal.
Showed that we are fighters and the locals told us that the Socceroos have earned a lot of respect for how they handled the entire game 🙂

Here’s hoping they can win the next game.

Did you see that Justin Beaver is at the World Cup too? http://theadventuresofjustinbeaver.wordpress.com/2014/06/12/great-balls-of-fire/

He stands out from the crowd!!

Sounds like you are having the appropriate amount of fun! 🙂 I still remember the flight Peggy and I took from Sacramento, Ca to get to Manaus Brazil. It was the longest I have ever been in transit. It made flying to New Zealand seem like a piece of cake. 🙂 –Curt

🙂 Yes – we have decided that we are going to see very other flight in future to be a breeze compared to this one!

Even though I never watch football I would love to watch at least one game at this competition. However I have the feeling that the climate might be some challenge for a person such as me 🙂

Maybe one day your wish will come true 🙂 It has been a long goal of ours and we are so happy we have achieved it! It is an experience we will never forget in our lives.

Have a great time! I’ll be glued to the TV too!

Thanks Celia! Although we love, it has been fun!! It’s just so electric and party-central 🙂

that’s a serious marathon! The Socceroos gave it their best by all accounts! Next two games are going to be REALLY tough!

Oh yeh, it was sensational. Socceroos gave it their best shot but seriously if we are ranked 50-something, playing one of the top 20 teams and only lose the way we did… We should be pretty proud considering the Spain and Netherlands scoreline, right? 😉

After fifteen minutes, I bet you’d have stayed at home! Great tournament so far.

Nope – no way!! Even though we lost (which we were not surprised) – the experience and atmosphere was worth every moment 🙂

Holy wow, two days! Have fun, you guys, can’t wait to read all about it! 🙂

Yep – two whole days (GONE!) But let us tell you – it has been totally worth it 🙂

Thank you for your lovely message 🙂
Actually had a great night sleep but now beginning to feel a wee bit sleepy…. Hope we manage to stay awake for the entire game!!

Woah, Sydney to Rio via DXB! 😮 I did want to try Auckland to Buenos Aires with Emirates, as that is actually the longest routing possible by air I think. But I guess I will never get to do it 😉 But Sydney to Rio is bloody long! Hope you enjoy yourself now you’re there, and I hope Australia get a good result.

The good thing is that Emirates are very good to fly with but possibly not worth adding all the extra time just to get there. Our options to getting to Rio were limited so this was our safest bet to get here.
So yes, as you say, “bloody long” and it certainly got us considering EVER doing that again if we DON’T have to! 🙂
But now we are here…. HAPPY DAYS!

I am insanely jealous of you two right about now and so I hope Australia won’t win! Just kidding guys! Have a great time.
p.s. Germany will be the champ by the way 😉

LOL – well, Australia will definitely surprise if they win 🙂 We just cannot wait for the energy and buzz in the air! Should be unreal!

Thanks!! The atmosphere should be incredible!! Will set the scene and expectation for the next two games that we go to 🙂

Good to hear your update. And wow – you found Brazilians in a state of “deadly quiet”. That’s rare!

At least Australia got one goal today…..it could have been worse.

I checked out your destinations. We didn’t see much of Sao Paolo (I hear it’s the New York of Brazil). I haven’t been to either of the other cities you’ll visit. Looking forward to seeing your pics!

We were unlucky to lose 😦 But although it was sad, the energy here is too uplifting to feel sad. Maybe we are just oblivious because we are on a travel-high 🙂

We won’t be going to Sao Paolo so can’t really comment either. Next stop Porto Alegre… 🙂

Thanks for stopping by!