how we spent 24 hours in rio

The sweet smell of warm air and the clear blue sky letting the glorious sun shine down on us – Rio, we love you already! This marks officially our second summer for 2014 (even though it was June and technically still winter in Brazil).

With only 24 hours in Rio, we had to be prepared. Glad to be in our shorts, despite shivering when we left Curitiba in the early hours, we threw off our jackets, pulled out our Havianas from the backpack and slapped those to our feet.

Our two weeks in Brazil was predominantly made up of football so on the day we were flying out, we had a full day in Rio to be “tourists”.

Other than probably waiting in queues for about 3-4 of those hours AND sitting in traffic, gondolas and furniculars for another 2 hours or so. This is how we spent, it actually seeing a few main sights of Rio de Janeiro.

It got its name from a direct Portuguese translation. The mountain looked like a sugarloaf mould…. To get atop Sugarloaf, it requires two cable cars. From the ticket booth, we could get a clear view of the mountain. Great to look at but it is the view from the top that is worth waiting for!

A beach of that size is just begging to be enjoyed. There was samba music playing, there was people cheering, there was people blowing horns and whistles. Everything is happening – you name it, we saw it! There are vendors selling hats, bags, souvenirs and food (sandwiches from cooler bags, coconut drinks and prawns on skewers). There are bodies littering the beach, sunbathing or building sandcastles, swimming, playing beach soccer or beach volleyball. Everyone wearing not much, we were possibly the two most overdressed on the beach. We are not big on beaches but Copacabana alone has made us want to come back to Rio!

We were at Corcovado in the late afternoon. Our tickets for the furnicular were to be at the top by sunset. But thanks to the crowd numbers, we were delayed and so missed seeing Rio during the day and at night which is what we had hoped for. Oh well, we will just have to come back again and see it for ourselves during the day. Not that the views at night was a problem. Far from it…..

A furnicular ride, an elevator ride and 2 escalator rides later, we see the ONE thing that we wanted to see in Rio: the statue of Christ, illuminated at night. What hits us first is the size of it…. Our eyes start at the base of the statue and work up and up and up. Craning our necks, we finally see his outstretched arms. And yes, it does bring a tear to our eyes. 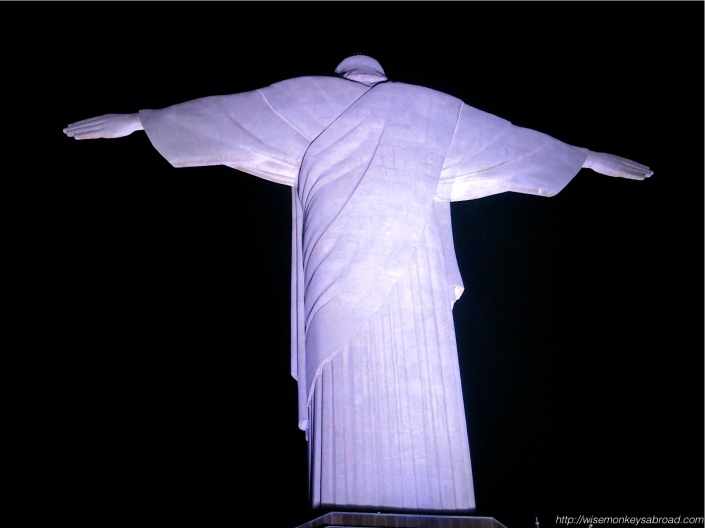 What a magnificent way to end our time in Brazil; standing above Rio at the feet of Jesus! The place is teeming with tourists but we take the time to look out into the city’s lights below and just reflect on how lucky we are to have made it here, to experience one of David’s biggest dreams ever and to see one of the world’s most renowned monuments.

Admittedly, the three things we saw were touristy but all three provided an experience that was unique and memorable to us in their own way! The added World Cup football fever may have also contributed to the atmosphere and the vibe of the city. And we know one thing is for certain, Brazil, you will be seeing us again!

Have you been to Rio de Janeiro?

during brazil world cup – our top 8

The World Cup in Brazil is now rolling towards the quarter finals, only 8 of 32 teams will remain – the top 8! So we figured we will have our very own top 8… our top 8 moments from this visit to Brazil.

8.  Brazilian BBQ – we have eaten it countless times in Australia but finally trying it in its country of origin. The meat is so tender and succulent albeit salty at times! 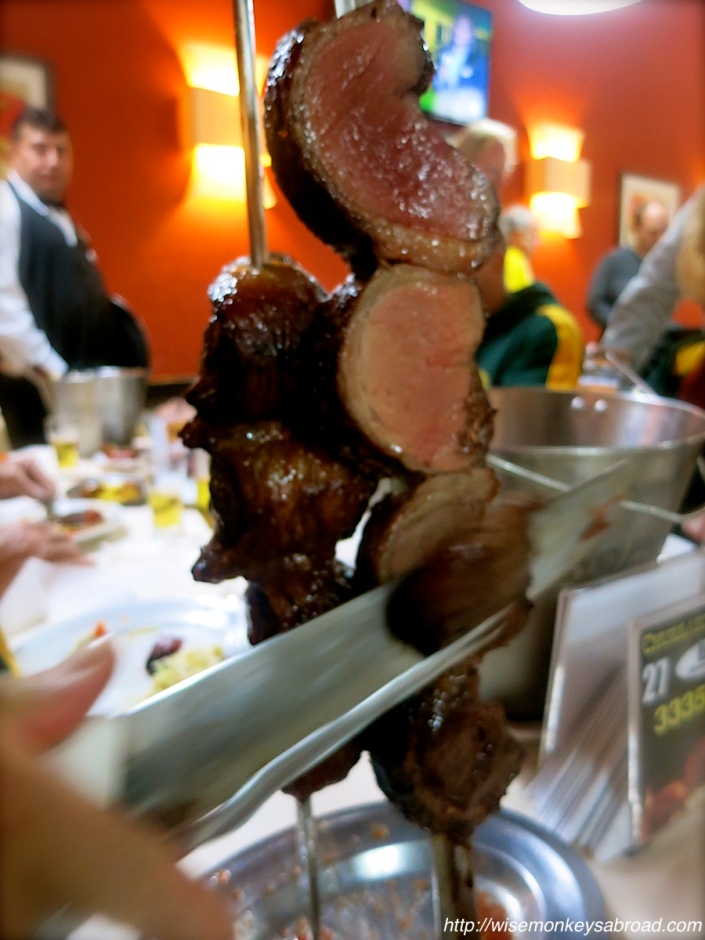 7. Curitiba Markets was such a surprise package. We love strolling through markets so this was our little pearl.

6. Singing our National Anthem, loud and proud at all three Australian matches. The first one was quite emotional and surreal, the realisation that we were really in Brazil for the World Cup!

5. Where else can you kick a soccer ball around with a stranger in an airport or on the street? Brazil!! Unfortunately, we didn’t have our camera ready for these random yet memorable moments.

4. Churros with dulce de leche – the churros in Brazil is so much chunkier than what we get in Australia and the sauce is just heavenly! The guys that sold it to us were so excited we were Australians, they want a photo with us 🙂 Don’t miss churros, when visiting Brazil! 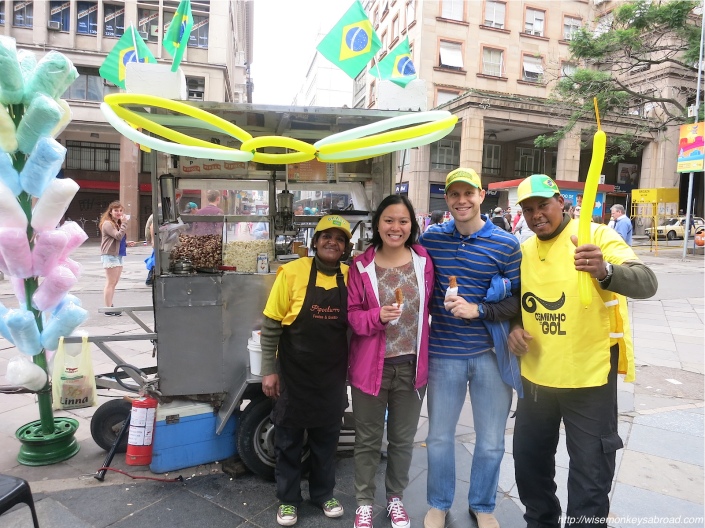 3. The Socceroos captain prepares for the penalty goal that will have Australia lead Netherlands 2-1 (even if it is only for several minutes, we were still ahead at one point of this game 😉 )

2.  The sense of camaraderie amongst the supporters – with countries competing on the field, there is no sense of rivalry anywhere! We enjoyed meeting and mingling with people of all nations here for the same reason as us 🙂 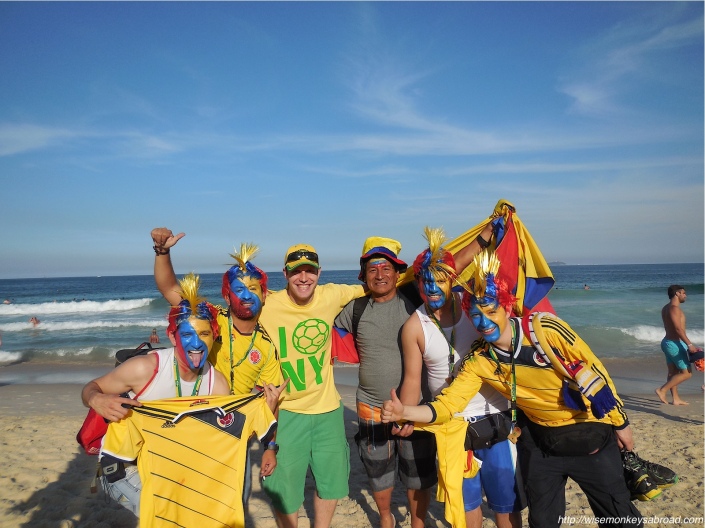 1. At the feet of Christ the Redeemer, feeling truly small and insignificant yet ever so humbled.

Have you been to Brazil? Tell us what you love about Brazil!

Michelle from the Daily Post asked for a photo that shows contrast!

Only a few days ago, visiting Christ the Redeemer in Rio De Janeiro at night time…. to us, this was a “contrast”.

Let’s go shopping on this weekend walk and we are predicting some groans at this point 😉  But it is here that we found an new addition to our current 3 wise monkeys collection.

So where are we? At Curitiba’s Sunday Markets – totally worth the visit and worth recommending. When we were first told about it by the reception staff in our hotel, we did not imagine them to be as huge as they were. There were hundreds and hundreds of stalls selling everything: crafts, food, toys, clothes and much more.

The markets are the place to be on a Sunday (from 9am), everyone converges to either sell, buy, browse or eat. We chose to do all except sell. It took us about 2 hours to walk the entire markets, walking up and down the many aisles! In some parts,  we shuffled along as the crowd numbers increased.

Although, there was some duplication in the stalls, most were rather unique!

We were told, the markets were “not to be missed” and we are so glad we went! We absolutely LOVED these markets 🙂 And even were able to enjoy some beautiful music performed by these young musicians. 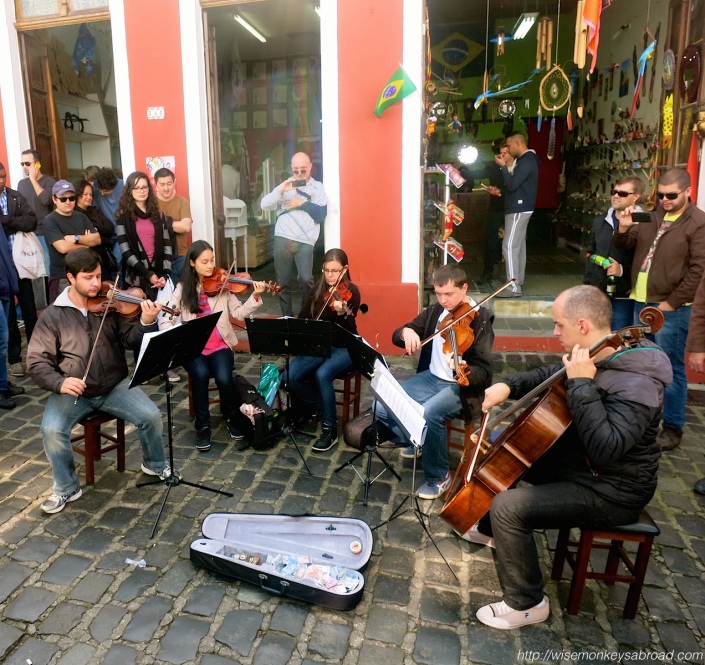 Hope you enjoy a selection of photos of some of the things being sold. 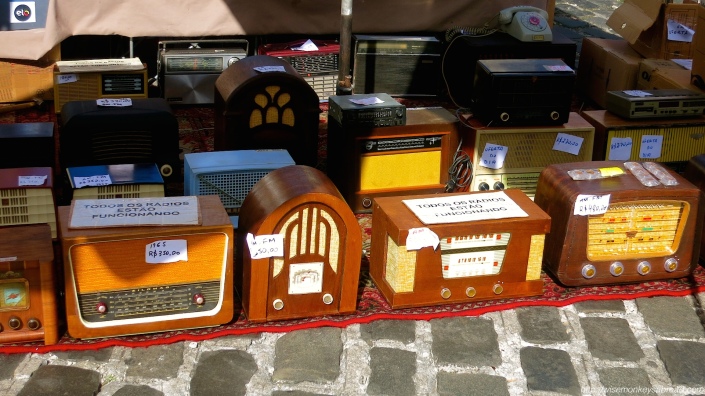 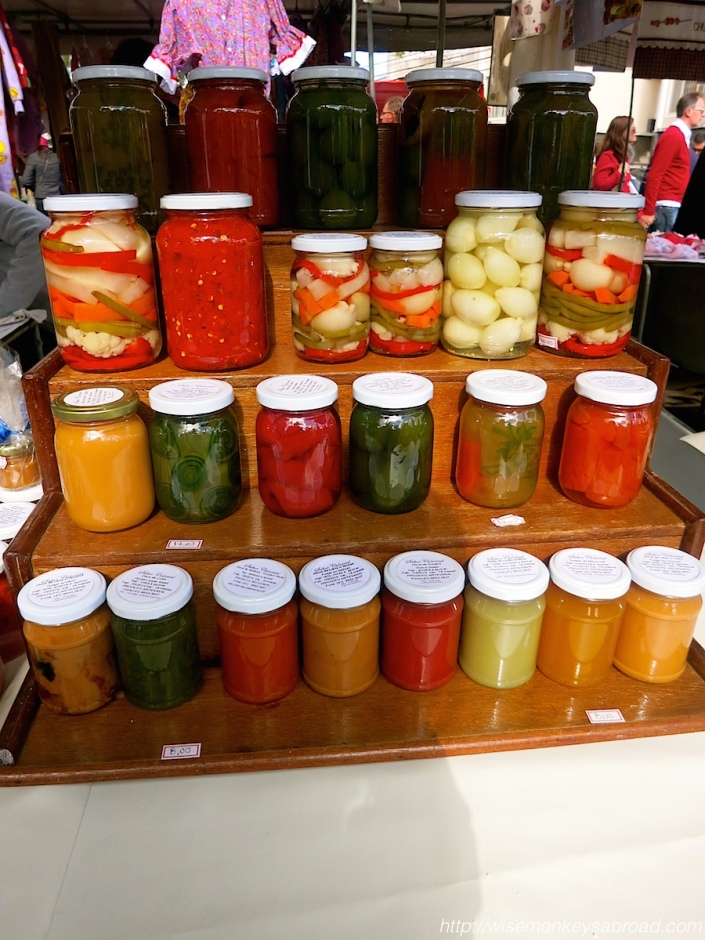 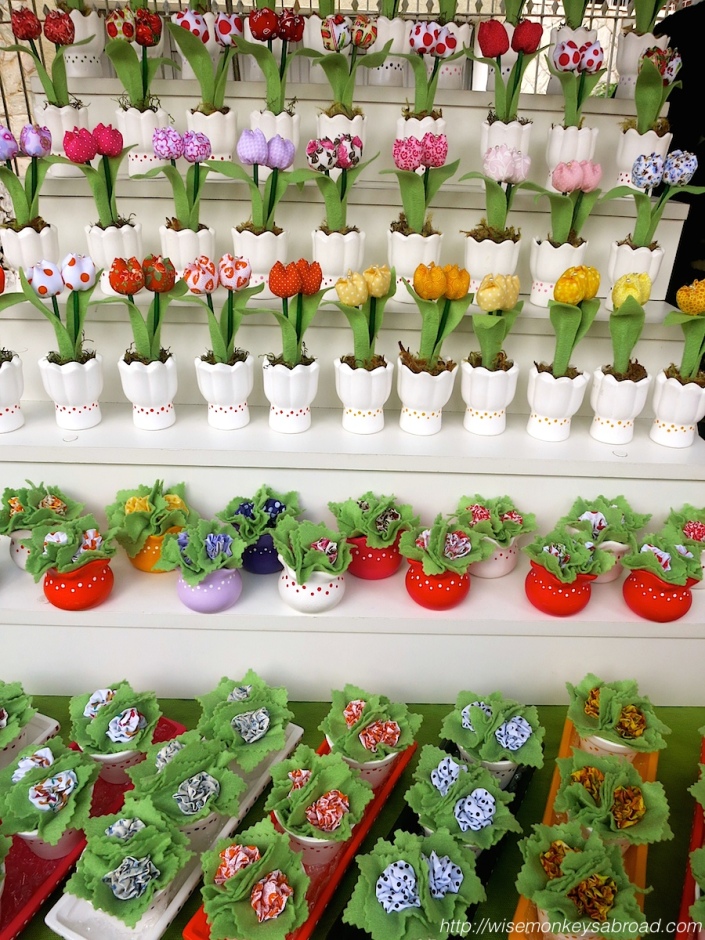 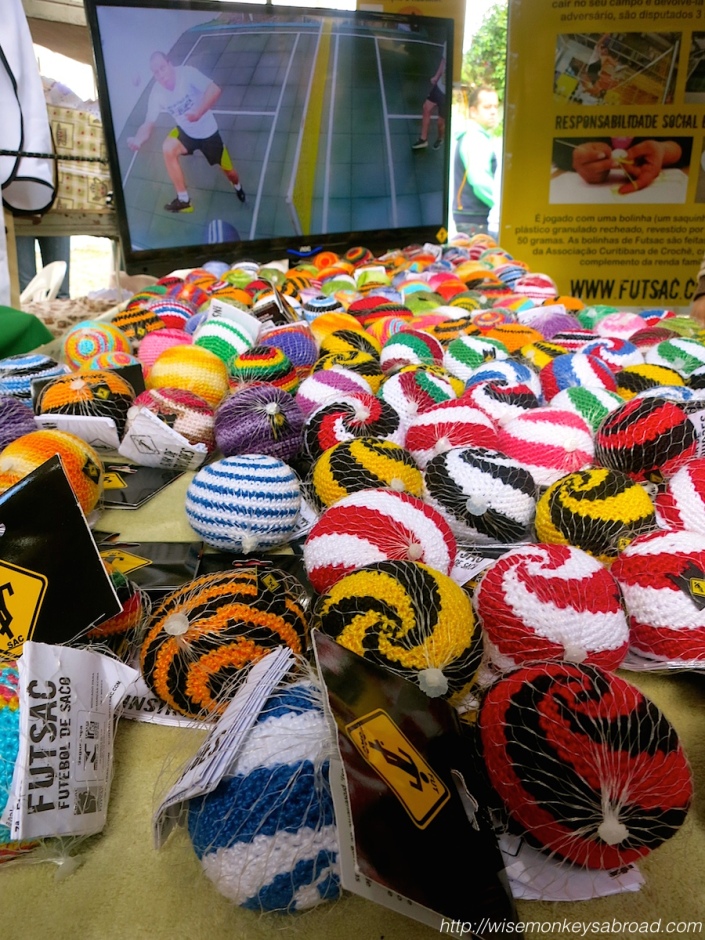 Wishing you all a great week ahead!