The mayor describes Porto Alegre as “a port where a community with multiple cultures and different ethnicities live in perfect harmony”. This is a really pleasant way to describe the city. It seems rather harmonious but obviously it is tough to know for sure with one of the world’s biggest event currently going on.

Today was game day in Porto Alegre – France vs Honduras and the “Goal Walk” from Mercado Público through to the stadium (Estadio Beira Rio) was filled with French supporters donning the flag and their faces painted red, white and blue! 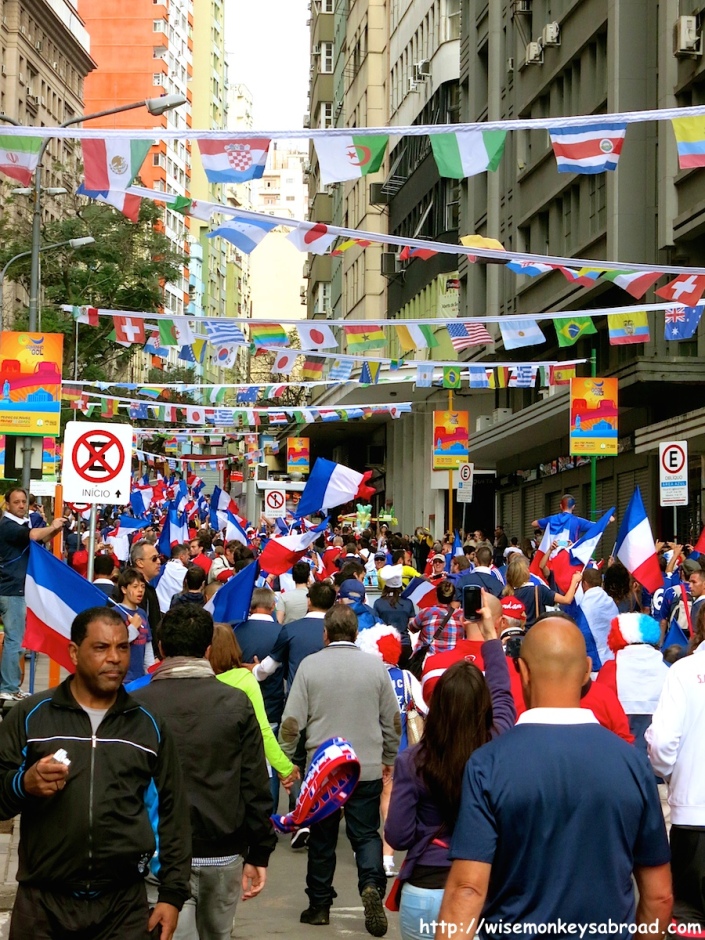 But let us share with you some of the historical district that we saw on our walk. The City Hall was inaugurated in 1901. There is a beautiful fountain at the front made of Spanish tiles and given as a gift by the Spanish Community in 1935. The fountain now appears to be a landing pad for pigeons. 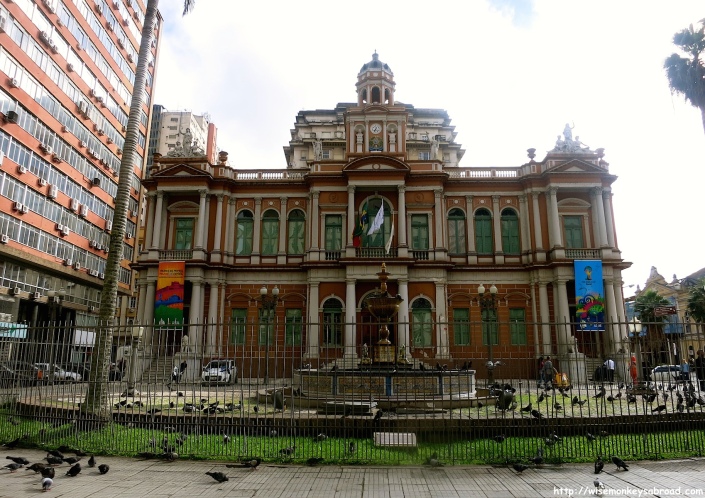 Alfândega Square is one of the most famous squares in the city. There is a park area that has local craft markets around along the pathways and an Art Museum at one end of the entrance. Today we didn’t have enough time to visit the museum but will be sure to get there during our time here.

Nossa Senhora das Dores Church is the oldest church in the city, and took almost a century to complete. Its blinding white exterior drew us in to walk up all the steps to have a peak inside. And inside was beautiful. The inside smelt like any other Catholic Church: candles burning and “woody” if we can describe it like that. Out of respect for those inside, we didn’t take photos, so you will have to take our word that it was beautiful 🙂 The ceiling was painted in a soft green and the altar was rather extravagant. It was encased in white columns with gold tips and really was the “centrepiece”.

We finished up our walk at the FIFA Fan Fest for the rest of the afternoon cheering at a big TV screen, sitting on muddy grass 🙂 Hope you enjoyed coming on a brief walk through a Brazilian World Cup Host City with us! 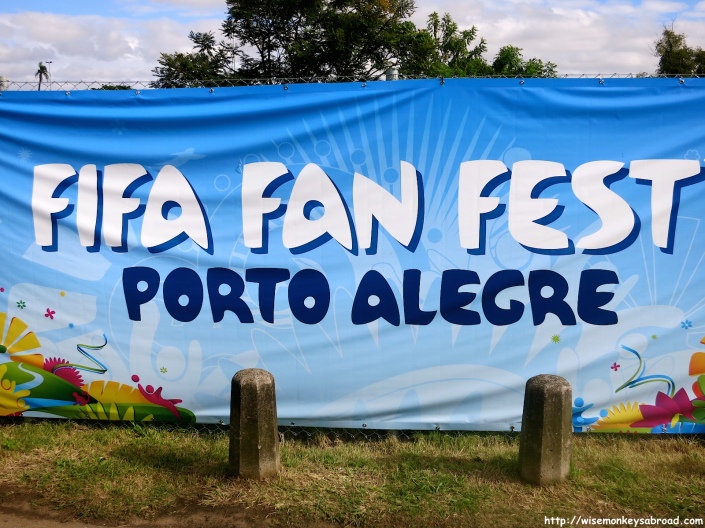 Wise Monkeys Random Piece of Trivia: The 30°S Parallel South of the Earth’s equator passes through Porto Alegre hence that is the city’s latitude.

The atmosphere must be fantastic there and if you’re going to go to the soccer Porto Alegre must be a wonderful place to visit. Are you basing yourselves there or moving around?

We are following the Socceroos around so we are only here for several days. Off to Curitiba tomorrow for their final game with Spain!
Pity they didn’t get up today but their performance was stellar!! We were so happy to have seen this game live! In box seats in fact 🙂

How exciting for you to have great seats. I think they’ve done very well.

Great shots, the City Hall is so beautiful! 🙂

Thanks Vlad!! Yes, the old buildings are so pretty. We just love photographing them! 🙂

It was LOUD both in colour and in sound 🙂 Thanks for stopping by and for your comment!!

What a great place to be. Enjoy!

football fever indeed – and great shots – wight he flags, people and buildings – thanks for this – feel the excitement….

Glad the football fever atmosphere is apparent!! It is EVERYWHERE! 🙂

Love seeing buildings with such character. It appears to be big city urban, but with a history and a heart. Beautiful photography!

Thank you 🙂 we happen to be staying not far from the historical district so it’s convenient! Yesterday most retailers and restaurants were closed being a Sunday so hope today we are able to sense the city with a little less supporters hyping it up 😉

Beautiful walk… it truly felt like we were along with you. Great choice for photo sizes too! My family has been peeking over my shoulder to view the posts you are writing during this trip. Keep up the super photo/commentary!

Thanks Jane 🙂 glad we are sharing the experience with your family as well!!
And a huge thank you for your encouraging words – we will try our best to keep it up 😉

Thank you!! It is a wonderful country!

Looks lovely over there! And yes, incense and a wooden smell : that’s church indeed 😉

Oh, so glad we described it correctly! The smell is just so distinct 🙂 good luck with wrapping up the school year!

Hi guys so glad you have started your adventure with such a fabulous experience in a beautiful country. Looking forward to seeing where you go after this

Thank you for stopping by!! It’s been absolutely unreal with the football fever atmosphere.